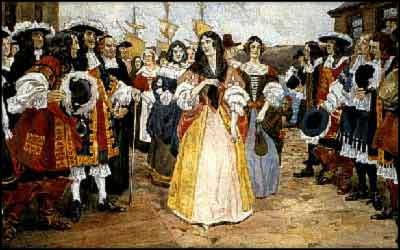 Next week, on June 11 about 36 descendants of the “Filles du Roy” that helped populate Canada in 1663 will stop at Niort.

The advent of a “Filles du Roy” in Canada is a historical fact as capital helped populate the colony was declining due to lack of women. In the region, the fate of Catherine Fiebvre, who lived Niortaise street Mother-God, will be discussed. The simulacrum of 1 departure by boat to New France from La Rochelle is one of the great moments.

says Margaret Morrison-Gaboreau, Augéenne and retired teacher who board at the heart of Family Circle Deux-Sèvres 20 years in Quebec .

In connection with France-Québec and the Historical Society of the Daughters of the King, “regularly fruit of his research is transmitted to Marcel Fournier in the Genealogical Society of Canada.” It details the outline of this historical fact.

“It all started in 1663 when 36 women from Paris, Normandy and the west of France, with the king by 50 pounds, 100 pounds for the luckiest , took the start in La Rochelle on board the Eagle-d’Or. They do not know where they were going, could neither read nor write but embarked for a better life know. “